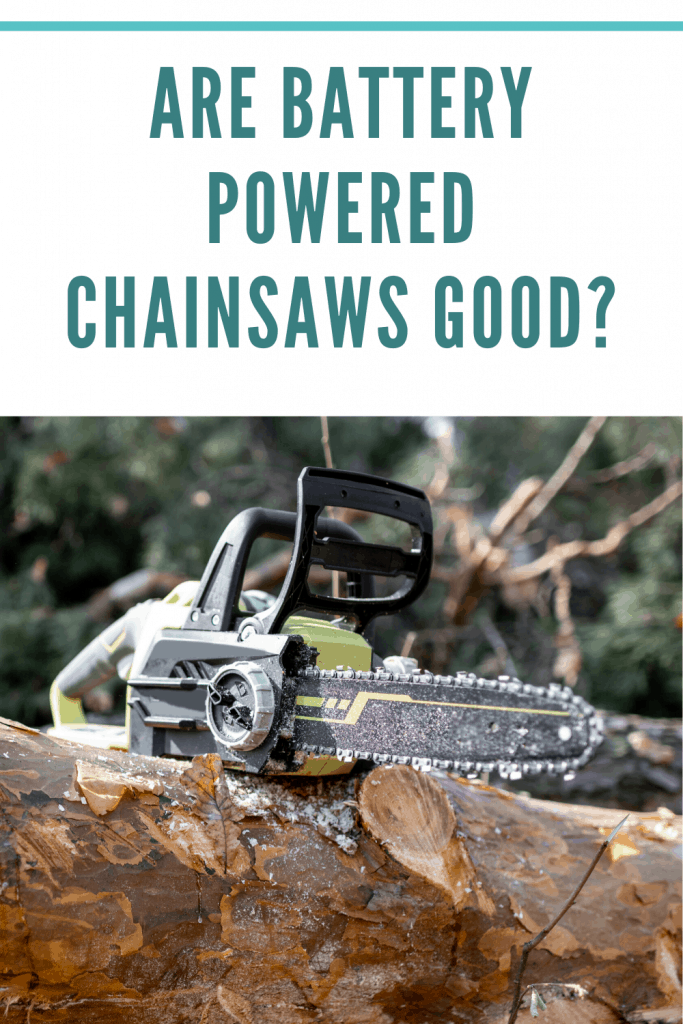 Battery powered chainsaws have become very popular among gardeners and professionals. They appeal to users who don’t usually cut and trim lawns for more than a couple of hours at a time and don’t want to mess around with fuel.

They make much lower noise than a gas chainsaw, which is both good for you and your neighbors. The saw remains almost quiet while you are not cutting and produces a low sound when you trim branches. They are also very lightweight and easy to operate. You can start an electrical chainsaw with the push of a button.

In this article, we look at electric chainsaws in detail and consider their main benefits.

Basically, there are two types of electric chainsaws:

Both of them have their own pros and cons. A corded chainsaw can be used without the worry of running out of batteries. The saw on these models does not have a battery, just the blade, and electric motor. This is why it is slightly lighter in weight.

The downsides are that, when moving around, the extension cord can become tangled in an object.  Because of extension cord limitations, you will also find it difficult to carry everywhere in your yard and this will limit your reach.

The battery powered chainsaw can be taken anywhere and moved around with ease. There is no risk of tripping on the extension cord. However, the battery life causes limited runtime and you will need to buy spare batteries.  You should have plenty of runtime with battery saws to cut several large tree limbs, or even cut down a small tree.

Both the corded and cordless electric chainsaws have beneficial features that are useful for users.

Safety is an important feature that you get with electric chainsaws. These units are safer due to a number of reasons:

The lighter weight, shorter bars, and lower chain speeds make it easier to keep an electrical chainsaw firmly under your control.

Electrical Chainsaws are Easier to Use and Maintain

Gardeners, homeowners, and property managers want a cutting tool that is easy to use and provides enough power to get the job done. They want to deploy a chainsaw that isn’t bulky, starts up with ease, and works with minimal difficulty.

An electrical chainsaw is good for all of that, and even novices will be able to use it without any difficulty. An electric chainsaw could be the right choice for you due to a number of reasons.

If you are looking to clear tree branches from your property after a storm or heavy rain, you will want a chainsaw that starts immediately without the need for maintenance or refueling. An electric chainsaw is a perfect tool for such an occasion.

Although electric chainsaws only became popular in the last two decades, the technology has been around for almost a century. Previously, it wasn’t feasible to market them commercially. Tech advances have made them more economical to produce and use.

The price of electric chainsaws has come down considerably. Today, you can purchase an electric chainsaw in the market at a similar or lower price than a gas chainsaw. With the government’s drive and subsidies towards eco-friendly products, we expect the prices for electric models will continue to go down in the future.

Some people have the wrong perception that electric chainsaws aren’t very powerful or that they are somewhat flimsy and weak. The perception is based on earlier models that were commercialized and failed thirty years ago.

Technology has come a long way since then. Today we have electric powered vehicles running on the streets that offer performance which equals gas based vehicles. The same holds true for electric chainsaws.

The technical specs for electric chainsaws show that some of the models can go up to speeds of 6600 RPM. Modern electric chainsaws can generate the same level of power as a 40cc gas engine. Brushless motors and, for battery-powered saws, increased battery life have really helped equalize battery saws and gas-powered saws.

Now they won’t cut down a tall oak tree, but they are quite capable of handling bushes, branches, pruning tree branches, and even cutting down small trees with ease.

Electric Chainsaws Are Good for the Environment

Environmental conditions have become a major concern for consumers and manufacturers over the decades, Electric chainsaws run purely on electric motors, instead of gas-powered engines. This makes them cleaner product and more beneficial for the environment.

If you are concerned about the environment and want to use a product with low carbon emissions, an electric chainsaw is perfect for you.

A regular gas chainsaw creates noise at a level of 108 – 118 decibels. That is even higher than the level of noise created by a motorcycle passing nearby which generates 98 – 108 decibels.

Electric chainsaws can generate noise at a level of 90 – 102 decibels while cutting. Admittedly, you can’t really call that quiet but it is around 15 – 25 decibels lower than the sound produced by a gas powered chainsaw.

However, the sound of noise can double at every 10 decibels so a reduction of 15 – 25 decibels makes electric chainsaws 2 to 3 times quieter than their counterparts in gas.

How good are battery operated chainsaws?

They are plenty capable of making several hundred cuts per charge.  With brushless motors have the speed to make some pretty impressive cuts and compete with similar-sized gas-powered chainsaws.

Battery powered with modern lithium-ion batteries are powerful and have the capacity to do some small to large cutting jobs.  Battery powered chainsaws are more than capable of handling the tasks of the average homeowner.

How long does a cordless or corded chainsaw last?

Cordless, as well as corded chainsaws, have pretty much the same mechanical pieces.  They have a motor, bar, and chain.  With cordless, you also add the battery.

The motor should last the life of the chainsaw as long as you do not abuse the chainsaw cutting things beyond their suggested capacity.  The chain bar is replaceable just like a gas chainsaw.  The chain is also replaceable and should be replaced if it is no longer sharp enough to cut.

Just like with gas chainsaws you need to maintain proper bar chain oil to help keep the bar in good condition. With just a little maintenance you are able to get many years of use out of an electric or battery powered chainsaw.

How long does a battery last in a battery powered chainsaw?

As far as runtimes, a 40v or comparable battery powered saw should be able to make many cuts on a charge. The length of runtime depends on many factors, such as type, hardness, and diameter of wood you are cutting.

Blade sharpness is also very important when considering runtimes.  Trying to cut a limb with a dull blade will consume extra battery power and potentially cause harm to your saw.

Is a battery chainsaw safer?

Battery and electric chainsaws have many of the same safety features as gas powered chainsaws.  They have chain brakes, small diameter bars to reduce kickback, and lockout buttons to keep the saw from starting accidentally.

One great thing with battery and electric saw is that they instantly shut off when you release the trigger, due to how motors are powered.  Battery powered chainsaws are as safe or safer than gas powered saws.

As normal always follow your manufacture instructions for operating your chainsaw

Should I buy an electric chainsaw?

Absolutely you should.  I have two battery powered chainsaws and love them both.  I hated messing with 2 cycle engines and the maintenance involved in running a gas powered chainsaw.  The ease of operation with comparable power is a no-brainer.  For the average homeowner who needs to chop up some firewood, prune trees, cut a downed limb or two, a battery or electric chainsaw will easily accomplish those tasks and much more.

So are Battery Powered Chainsaws worth a look?

Well absolutely.  They offer many great advantages over gas chainsaws and can do just as good a job these days.  If I was in the market for a new chainsaw I would not hesitate to look at a battery powered chainsaw, to take care of chores around my house and property.