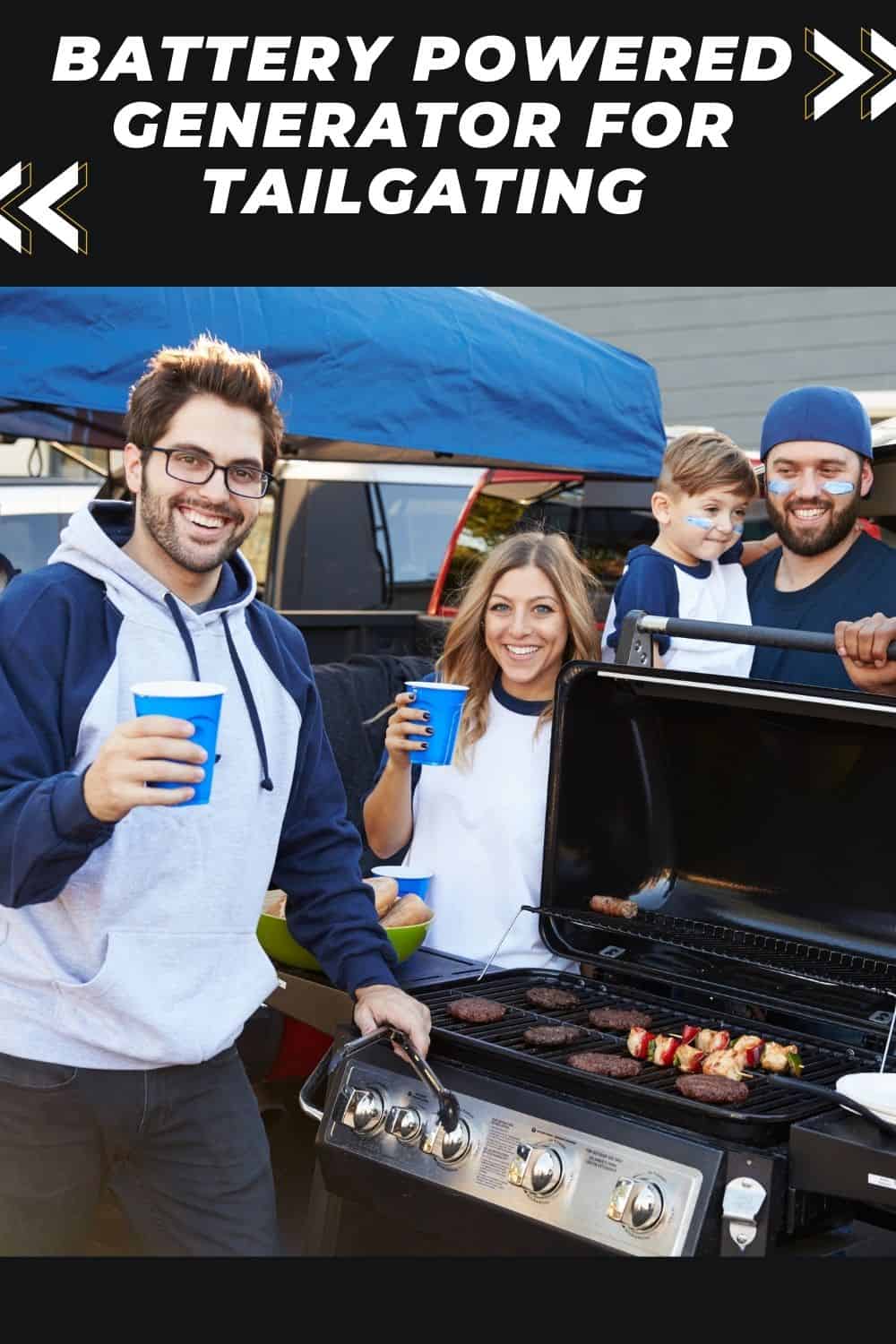 The one thing all tailgating events have in common is a need for power.  Generators are often that source of power, droning away in background providing power for the tv, blinder, music, and lighting.  What if we could have all that power without the extra noise and hassle of a gas engine?   Let’s take a look at if you can use a battery powered generator for tailgating.

If you have ever been to a sporting event in the US,  you know that tailgating and a tailgate party is a major part of the event experience.  I am a big fan of college and professional football, and tailgating before and after those games is just about a requirement.  Sporting events aren’t the only events people tailgate for, often folks will tailgate for music concerts and festivals too.

We hope you love the products we recommend! If you buy something through our links, we may earn an affiliate commission.

What are the different types of generators?

When someone mentions a generator at a tailgate, this is the type of generator most folks are referring to.

Portable generators are usually powered by gas engines.  They use a combustion engine to produce electricity.  You can then plug appliances into the generator, which in turn provides power for the appliance.

They can run electrical items such as TVs, freezers, and refrigerators. Some also come with the option to run on both natural gas and propane.

Portable generators will run continuously as long as you have fuel available for the generator to run on.  They generally are more powerful and battery powered generators and can produce enough watts to handle the considerable load. 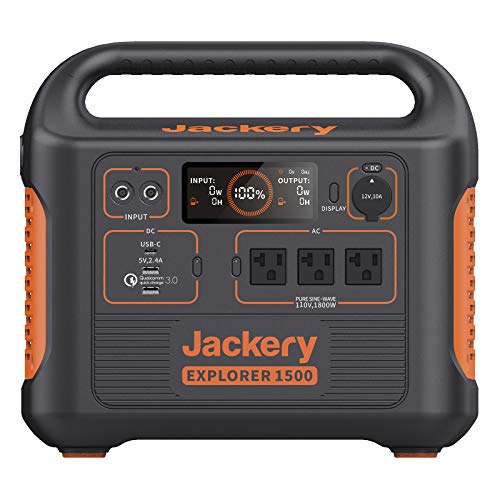 Portable power stations are the next-gen generators of the future.  These generators run on a rechargeable lithium-ion battery.

They are can be small enough to carry with you in your car or backpack, or they can be the size of some of the more popular portable gas generators.

They make no noise when running, they have no exhaust fumes, or emit any type of pollution. Battery powered generators are safe for use both inside and outside your house. They’re perfect for tailgating at sporting events or the back of your truck.

Portable power stations are different from your typical generator because they are silent, no noisy generator to annoy other tailgate parties nearby. Also, since they require no fuel, you can keep them close to your tailgating site without concern for emissions or fire. You also don’t have to worry about storing the fuel while you head off to go into the event you are tailgating for.

Since they have a simple power on/off switch there is no need to worry about a fouled spark plug keeping the generator from starting. Most modern battery powered generators have the ability to add solar panels to provide an almost limitless charging source.

Just like portable gas generators, battery powered generators have the power output to can run TVs, freezers, and refrigerators.

What to look for in a battery powered generator

The most important thing to remember when getting a battery powered generator or power station for your tailgate is the capacity of the generator.  You will need sufficient power output to power the appliances or devices you want at your tailgate.

You need to determine what you will be running and what are the electricity requirements (ie how many watts) for all of those devices.  This doesn’t apply to just battery powered generators, this applies to gas powered portable generators too.  This calculator will help you decide how much power you might consume.

Once you determine the power output required, the max watts you will use,  you can pick out a battery powered generator to meet those requirements.  You can run a device if you can’t plug it in, so outlets are very important.

If extra capacity is needed some of the newer battery powered generators can be connected in parallel, and even solar panels can be added as an option to help decrease recharge time.

Make sure the battery powered generator or power station has enough AC outlets to plug your appliances into.  I would recommend 2 or more 120v AC outlets.  Also, you might want to have USB (both A and C) ports.  Some even come with DC outlets to plug in devices that use an auto-style DC plug. 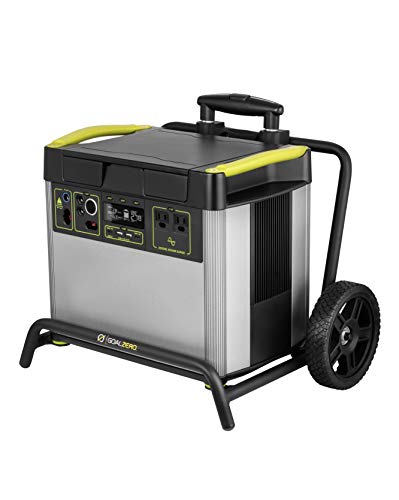 If you are tailgating you are going to want to be able to move the battery powered generator or power station from place to place easily, but also be able to store it in your vehicle.
Most of these devices are relatively portable, just like portable gas generators.  Most come with carrying handles at a minimum, but some also come with wheels and expandable handles like your rolling luggage or coolers to make them easier to move from place to place.
Larger battery powered generators like the ones made by EGO and RYOBI are about the size of a small rolling cooler.

What devices can you power with a battery powered generator?

The short answer is pretty much anything you can power with portable gas generator.  The only caveat is time.  How long you will be able to run a particular device will depend on the capacity of the power station or battery powered generator.

Tailgating at least the ones I have been to seem to focus on food and drink.  Food is a primary focus of many tailgates and depending on when you are tailgating you could encounter multiple meals during a tailgating session.

So you might want to limit the use of these types of appliances or get a battery powered generator with a really large capacity or have one that allows for the swapping of batteries and have extra batteries on hand. I tend to favor the models from EGO and RYOBI for that very reason. 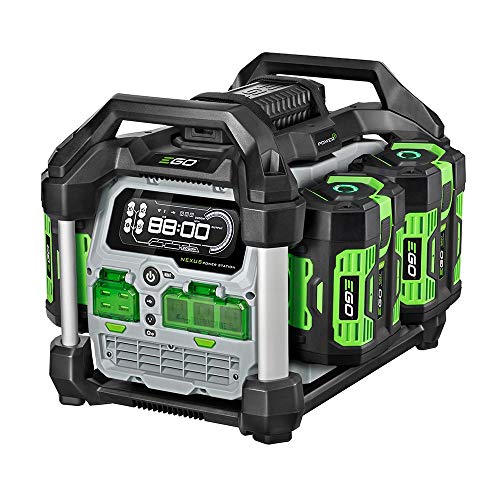 I haven’t come across this too often but sometimes folks like to bring along a coffee maker or tea kettle. These are also pretty power hungry and can eat up some battery storage quickly. A typical coffee maker can use 1100 watts of power when it starts up.  That being said most of the larger battery powered generators will not have an issue brewing up some hot coffee on that cold winter’s day for your tailgating buddies.

Speaking of cold beverages, you will have no problem running an electric cooler or even a small refrigerator with your battery powered generator.  Some larger models are specked out to handle a load of a standard refrigerator in a power outage.

Seems like these days TV’s and speakers are common place at most sporting event tailgates, with some more elaborate tailgates having satellite tv and elaborate speaker systems. Needless to say, you won’t have any issue powering your LCD TV and keeping the tunes playing all day long.  EGO boasts 16 hr runtime for a 40″ TV that uses 80 watts of power when using their battery powered generator.

You also won’t have any issue powering up some lights for that evening event, if you simply need extra lights these power stations and battery powered generators. A typical home led light uses about 60 watts of electricity and you can run several lights for a considerable amount of time with no issue.  You could run a set of string lights that use fewer watts for your tailgating tent for a longer period of time.

Most modern battery powered generators also have the pure sin wave capability to help keep those sensitive electronics like TVs and laptops safe when they are plugged in.  You will also be able to post your up updates to social media since most of the power stations have a USG port or multiple USB ports to keep your cell phone topped off and ready to use.

So I am done tailgating what else is this thing good for?

Well, you can use these battery powered generators anytime you need some extra power.  If that is when you are camping and need some power for lights, or you are hosting a backyard movie night and need to power up a projector in the backyard.

These devices are so versatile you can use them for tailgating one day then emergency backup  power the next day, to keep the food in your fridge from spoiling.  As far as backup power goes, you can use them in your house so you don’t have to worry about running outside in snow or rainstorm to refuel your gas engine generator.

Where shouldn’t I use battery powered generator

Well, the old saying goes don’t mix water and electricity.  It goes for battery powered generators and power stations too.  While most are water-resistant, you wouldn’t want to leave one out in a rainstorm or running on wet ground.  So if the weather goes south and the rain starts to come down at your tailgate you should get the generator to a dry area.  Some even come with rain covers, but it is best to keep them dry if possible.

Well, another great part about these battery powered generators is that clean up after an event is a sinch.  Not much to do really, you don’t have to let them cool down and you don’t have to store fuel anywhere either.  You just turn off the power and pack up any extension cords you are using and you are ready to go store the generator in your vehicle.

I know a few years ago when we used gas generators someone had to stay behind and make sure our generator didn’t walk off (they usually were just there for the tailgate, but still) during the game, which I was always a little worried about.  Being able to just put the generator in your truck, or car when you are done with it is great.

So can you use an electrically powered generator for tailgating? 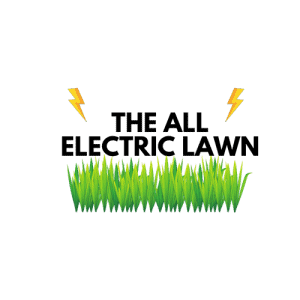