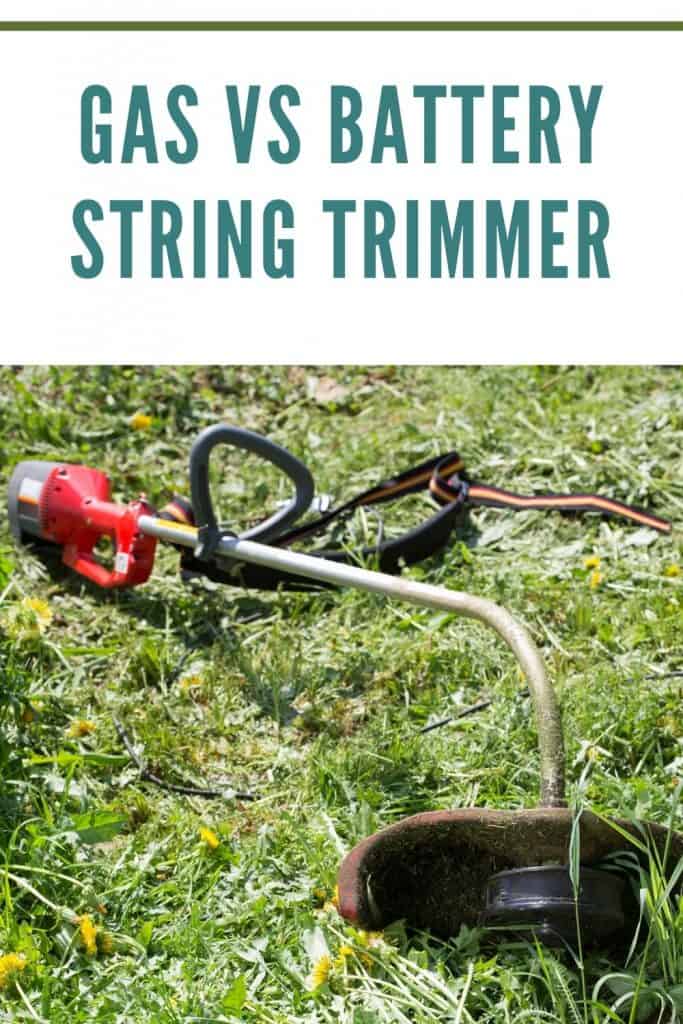 Trimming the weeds and grass around your home can be difficult unless you have the right tools. String trimmers are the perfect tool for taking care of this trimming task.   Let’s take a look at a gas vs battery string trimmer.

If you’re looking for a cordless string trimmer, then you’ve probably heard of gas powered ones. However, another type of string trimmer has been gaining popularity lately – the battery powered ones. They’re often cheaper than their gas counterparts, and they also offer better performance.

Not to be biased here, but you are on an electric outdoor tool blog, battery powered tools have really come of age in the last few years.  I am not just talking about string trimmers, but lawn mowers, hedge trimmers, and leaf blowers. 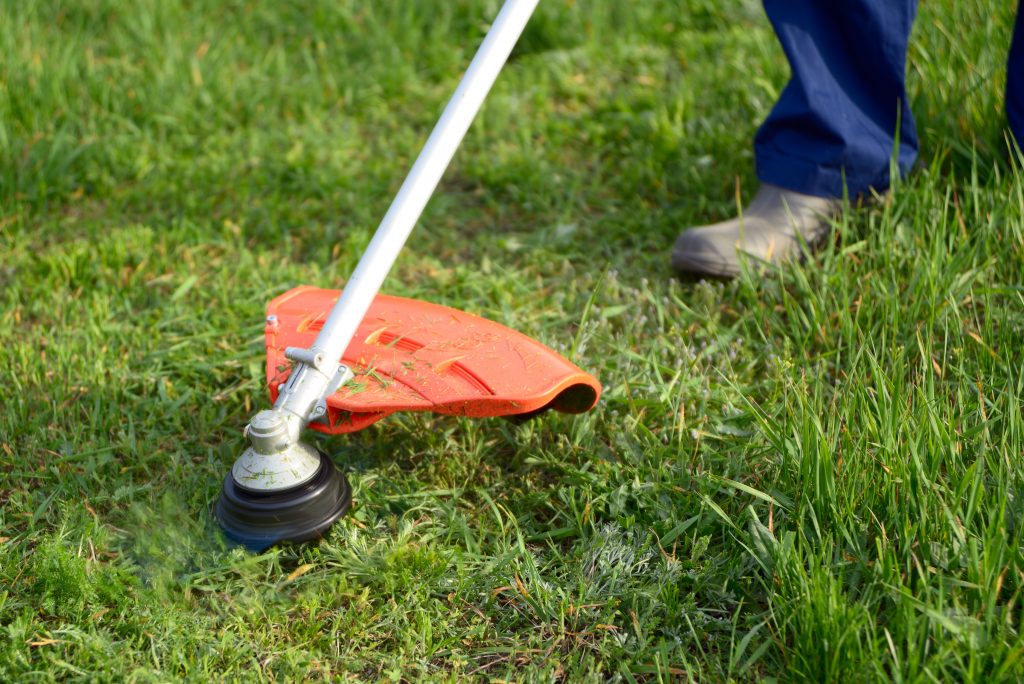 Well, if you have done any yard work in the last 20 years, you have used or have at least heard of a gas string trimmer.  Gas string trimmers are the old stand-by for weed eating and grass trimming.  They are powered by either a 2 stroke or 4 stroke small gas engine.

The noise of a gas powered weed eater is unmistakable; the loud buzzing and whirling can be heard daily as professional landscapers tend to lawns and businesses.  These are powerful and capable trimmers that have a bad reputation for being hard to start and spew a lot of emissions.

A lot of Maintenance and Heavy?

While the engine makes them powerful, it also makes the trimmer heavy when using the trimmer for extended amounts of time.  This engine also requires maintenance and fuel.  Yearly maintenance includes oil changes for 4 strokes, air filter changes, and spark plug replacement, to name a few.

Easy to Power but it Comes with a Cost

Gas is readily available anywhere and provides long runtimes (as long as you don’t run out of gas).  If you have a 2 stroke engine on your string trimmer or weed eater, you will also need to mix fuel with oil, which can be a hassle.  This fuel also needs to be stored and stabilized if not used for a long time, so the fuel doesn’t become unusable.  Here are a few of the pros and cons of gas string trimmers.

Lightweight but with Limited Runtime?

That being said, you shouldn’t have any issue trimming even some of the largest yards with a modern battery powered string trimmer.  I personally have an RYOBI 40v model and have no issues edging and trimming around my home.  I also have to trim around a dozen or so trees and a fence line.  I have never had an issue with the battery running out while trimming.

One of the many positives of electric or battery powered outdoor equipment is the noise or lack of noise created when running.  Battery powered string trimmers don’t disappoint in the noise department. They are relatively quiet, with only the whirling of the string creating most of the noise.

Maintenance is also a positive for battery powered string trimmers.  They require little to no maintenance.  The trimmer line will need to be replaced, but that is about it.  The batteries will need to be charged and maintained properly according to manufacture recommendations, but that is about it. Here are a few of the pros and cons of battery powered string trimmers 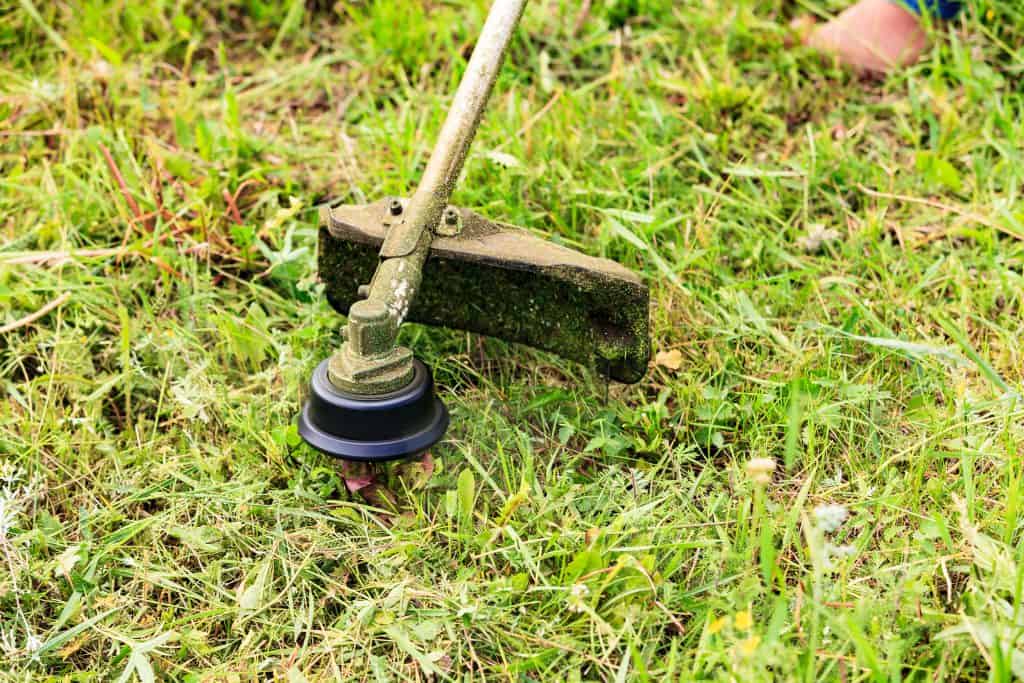 Well, that really depends on a few things.  Both gas and battery powered string trimmers excel at trimming grass and weeds.  What you need to take into consideration is power, maintenance, value, and runtime. In our case will reward a point for each category.

If you solely base your decision on power, then either of these types of string trimmer will work for you.  Gas powered string trimmers have loads of power and are time-tested to perform as long as they are maintained properly.  Gas string trimmers are widely used by professionals and homeowners alike worldwide and have been for many years.

Now runtime is a little interesting.  Gas powered string trimmers obviously are powered by gas or a gas/oil mixture.  Gas is readily available pretty much everywhere in the United States since it powers our cars and trucks.  If your gas power string trimmer uses a gas/oil mixture, you might have to find the specialized 2 stroke oil at a hardware or home improvement store to add to the gas.  Not a big deal but something to remember.

Gas string trimmers can run as long as you have gas available, so if you have a 1-gallon container of gas or gas/oil mixture,  you should be able to power your trimmer for a very long time.  This depends on the size of the engine and the workload, but it will take a long time (hours or continuous use) to run 1 gallon of gas through a string trimmer.

Battery powered string trimmer relies on lithium-ion battery packs in ranges from 18v – 80v.  These battery packs power the string trimmer’s brushless or brushed motors and allows for a decent amount of runtime, at least 30 minutes – 1 hour.  Like I have mentioned previously, I have never run down a battery trimming grass or weeds.

That being said, if you run out of power, you are done until the battery is recharged.  If you purchased another battery, you could continue trimming, but those extra batteries can be a little pricey. One other thing to note is that if you do get extra batteries, they are most likely compatible with other outdoor power equipment by the same manufacturer.

I have a good amount of RYOBI equipment, and I use the same 40v batteries for all of these tools. That being said, for runtime, I have to give the nod to gas string trimmers.

So like every small gas engine, gas string trimmers are going to require maintenance.  If applicable for your model, this includes oil changes, spark plug replacement, air filter replacement, and fuel storage.

If you fail to maintain your gas engine, you will have some issues down the road.  Those issues will be hard starting (if it starts at all), smoking,  abnormal fuel consumption, loss of power, and possible engine damage.

I have owned and still own a gas string trimmer ( though it has been pushed to the corner and not used in quite a while). I know the pain of replacing these parts and having an engine not want to start up after not using it for weeks. That is why I switched to battery powered outdoor tools.

Battery powered string trimmers require little to no maintenance, which, as I mentioned previously, is why I switched to them several years ago.  There is no gas to buy, no oil to change, no air filter, or spark plugs to replace.

It really is a simpler and easier ownership experience.  Lithium-Ion batteries are pretty easy to maintain.  You need to keep them charged and use them occasionally.  It would be best to refer to your battery operating instructions on battery maintenance, but it is pretty simple.

I will say that replacing a battery is not something I look forward to, as they can be pretty expensive, especially the larger batteries. That being said, battery powered trimmers win in this category.

Gas string trimmers can have a pretty high initial cost, especially models from more premium brands like Stihl and Echo.  Lower-end models can be purchased fairly inexpensively, but you know the old saying, “You get what you pay for.”  You might sacrifice quality for a lower entry point. There are plenty of inexpensive models that will work well for a homeowner for many years.

Gas trimmers also have ongoing costs for fuel and maintenance, which have to be considered as well.

As far as the lower-end battery powered models, the same goes for gas string trimmers.  You can purchase a more inexpensive model, but you might not get the runtime or power you might need to get the job done.  The 18v battery powered trimmer my father uses to trim around his home works for him, but I need something larger because I have more property to maintain.

In the value category, I give the win to Battery powered string trimmers.